The State of Cleantech Venture Capital, Part 2: The Investors

(A version of this post also appeared at GigaOM.)

tl;dr: There’s a widespread perception that cleantech venture capital must be tanking compared with VC overall. That perception is wrong.

In yesterday’s post, we looked at the amount of capital that’s been invested in cleantech start-ups to date. Today, we’re going to look at what that money is returning. This may seem like a topic of interest only to start-up investors, but it’s important to entrepreneurs too: Without returns, the money spigot eventually gets shut off.

The conventional wisdom about cleantech venture capital goes something like this:

“Cleantech VC must be performing much worse than VC overall. First, very few exits have occurred relative to the large amount of money invested. Second, cleantech companies are time-consuming to develop – so when exits do occur, they’ll take longer. Finally, during the same time period that cleantech VC got under way, Internet VC investment yielded big wins like LinkedIn and Groupon. Doubtless, cleantech returns must look awful by comparison.”

Every part of the statement above is incorrect.

Myth #1: Few VC-backed cleantech exits have occurred.
Reality: Relative to its level of funding, cleantech has actually overdelivered on exits.

In order to assess this myth, we need two data sets. First, we need to know the total amount of VC financing each year as well as the share of it that went to cleantech start-ups. Second, we need some proxy for exits – again, for VC-backed companies overall and for the cleantech ones specifically. I’m going to use the gold standard of VC exits – IPOs on major stock exchanges (i.e. NYSE, Nasdaq, etc.) – because the data is both readily available and unambiguous. The two data sets appear below. 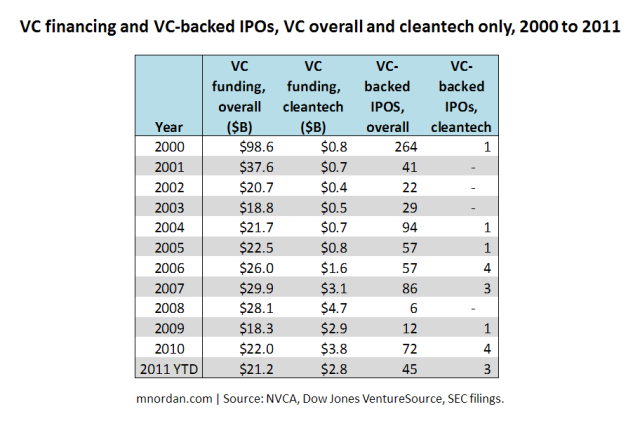 In any given year, we can compare cleantech’s share of VC-backed IPOs with its share of VC financing. If the former exceeded the latter, then cleantech start-ups would exhibit a better batting average than VC-backed start-ups overall.

There’s one complication: Because companies go public many years after they first get funded, we need to introduce a time lag to the financing data. This way, our “proportion of IPOs” and “proportion of financing” numbers will compare the same group of companies. Strictly speaking, the time lag should equal the average amount of time from funding to IPO, which in cleantech happens to be 8.3 years. But because that interval has shortened for the most recent crop of public companies like Gevo and Kior, I’m going to use five years. (Note that this will make cleantech look worse, not better).

Here are the results:

Since 2004, VC-backed cleantech companies have been generally overrepresented in the IPO markets relative to their share of venture capital financing. This pattern has persisted in 2011, during which non-cleantech companies like LinkedIn and Groupon went public. The trend isn’t perfect – it didn’t hold true prior to 2004, it hiccupped in 2008 (when only six VC-backed companies overall went public, none cleantech-related), and it may not continue in the future (in 2012, it will require one out of ten VC-backed IPOs to hail from cleantech, versus one out of 14 so far this year). Regardless, the claim that cleantech has suffered to date from proportionately few exits is patently false.

Myth #2: VC-backed cleantech start-ups take longer to exit than firms in other sectors.
Reality: So far, they take less time.

This one’s easy. As previously mentioned, the average time from founding to IPO for venture-backed cleantech start-ups is 8.3 years. For venture-backed companies overall, it’s 9.4 years, according to the National Venture Capital Association.

(After this gets posted, I expect a deluge of emails saying “Matthew, haven’t you argued quite publicly that cleantech innovation requires more time, not less?” I still believe this is true overall. What the present analysis shows us is that VCs have done a good job of restricting their funding to the subset of companies that fit their model.)

Myth #3: Cleantech VC funds must be doing worse than VC overall, because they’re not exposed to ballooning valuations in the Internet and digital media sector.
Reality: Cleantech-only VC funds have about the same valuation metrics as VC overall.

So far we’ve assessed the number of big exits that have occurred in cleantech and looked at how long they’ve taken to occur. But perhaps we just had a flash-in-the-pan of IPOs for cleantech start-ups that will never occur again. Maybe the few good companies in cleantech VC portfolios have all gone public already, and the majority left over all stink.

How could we test this? Well, VC funds are required to regularly report their interim performance – the current value of their investments compared with the amount of money paid for them – to the limited partners that provide the money to invest (mostly pension funds, foundations, and trusts). Unlike the IPO data, which shows us who crossed the finish line, these interim performance numbers show us who’s leading mid-race. If we could get at these numbers and compare the interim performance of cleantech-only VC funds with VC funds overall, we’d have a more comprehensive and predictive measure of how this cleantech venture thing is working out.

Venture capital firms don’t typically post their performance for the public. However, we have a back door to get at this data for a subset of VC funds. There are a few big pension providers out there which supply money to lots of VC funds and are also required by charter to report the interim value of each holding. One such institution is the California Public Employees’ Retirement System (CalPERS), which happens to have invested in 19 cleantech-only VC funds – those from firms like RockPort and U.S. Renewables Group that back cleantech companies exclusively. CalPERS reports its numbers with a six-month lag, meaning that the most recent data is from March 31, 2011.  This is the best sample available that we can use to judge cleantech VC’s interim performance. Here’s what the raw data looks like:

Let’s run through the columns:

What do we learn from this?

This might seem really bad at first glance, but remember that the average fund in this group is only four years old. Venture funds typically run for 10 years, and they almost always exhibit a “J-curve” of performance – meaning that they are under water for their first several years (when some portfolio companies die and go to zero, but the others haven’t appreciated much in value), and they only get above water in the back half. With that in mind, we ask: Is cleantech doing better or worse than VC overall?

As it happens, we can get the data to make this comparison. The National Venture Capital Association publishes the same kind of data that we have above from CalPERS, except that they do it for the entire landscape of venture capital funds. By comparing our cleantech-only fund performance data from CalPERS with our all-of-VC data from the NVCA, we can determine how the interim performance of cleantech-only funds stacks up to VC overall. When we do this, we should only compare funds of the same vintage year, to account for the amount of time that the funds have been running and to rule out year-to-year disruptors like the 2008 financial collapse. The results look like this: 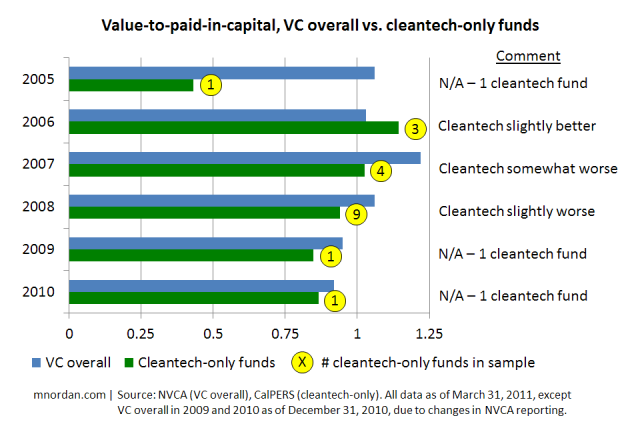 As you can see, we can’t learn much for the vintage years 2005, 2009, and 2010, because in each we’re comparing all of VC to just one cleantech-only fund. But from 2006 through 2008, we have a decent basis for comparison. And you know what? In each case, cleantech is a little better or a little worse than VC overall. Across the entire time period, the cleantech-only funds have a fund-weighted value-to-paid-in-capital ratio of .95x, whereas VC overall is at 1.07x. Given that both values are within ten percentage points of flat – and, moreover, that we are talking about funds that are at most five years old – this is not a large difference.

Further, we’re unfairly handicapping cleantech in this analysis. Why? We’re comparing the entire VC universe with cleantech-only funds. We’ve omitted the cleantech practices of generalist funds like Kleiner Perkins, DFJ, and Khosla Ventures, because there’s no place where we can get data on their cleantech performance carved out from everything else. This impacts our analysis because some of cleantech’s biggest VC-backed IPOs have been supported solely by these generalists – for example Kior, which had Khosla as its lone VC and delivered a $1 billion+ return that only shows up in the “VC overall” side of our comparison.

With this in mind, we can conclude that cleantech VC performance is roughly equal to the VC asset class overall (so far). Reasonable people can argue about whether the whole venture capital shebang is doing well or poorly, but can’t claim that the cleantech bit is bombing.

This analysis has, by necessity, been very investor-centric. What does life look like if you’re a CEO inside one of these cleantech portfolio companies? We’ll tackle that in tomorrow’s post.

This entry was posted in Numbers, The State of Cleantech VC 2011, Venture capital. Bookmark the permalink.

2 Responses to The State of Cleantech Venture Capital, Part 2: The Investors